The Old English god Tiw (also Tiu, Tig) is cognate to the Old Norse Tyr, the Old High German Ziu (also Zio), and the Gothic Teiws. These are all believed to stem from a proto-Germanic Tiwaz, which itself stems from a Proto-Indo-European root that references the heavens and their radiance.

This notion of “heavenly radiance” formed the basic Indo-European perception of godhood as seen in the various *deiwos group of words, eg. the Baltic Dievas (God), the Latin deus (god), the Indo-Iranian deva/daeva (god), Old Norse tyr (god, hero, sage), tivar (gods, heroes), and diar (gods, priests). Such Latin sprung words in Modern English as deity and divine also spring from this same root, while a brother stem provides us with such other Indo-European god-names as the Sanskrit Dyauspitar, the Greek Zeus, and the Latin Jupiter.

The very concept of the halo in the West likely has it’s roots in this perception of the divine. While we generally associate it with Catholicism and saints, the earliest depictions of halo’d figures comes from ancient Greece, where they were depicted as surrounding the heads of various heroes and philosophers from as early as the 6th century B.C., and were described as early as Homer (9th century B.C.),

“Minerva flung her tasseled aegis round his strong shoulders; she crowned his head with a halo of golden cloud from which she kindled a glow of gleaming fire”.

It’s equivalent in specifically Germanic art can be gleaned in the sun-wheeled bodied figures of Nordic Bronze Age rock-art and much later in the so-called “sunheaded” man of Anglo-Saxon art. 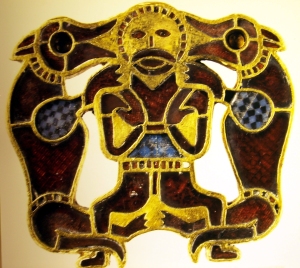 That the Germanic Tiw retained his ancient connection with the ideas of the heavens and their radiance that are at the very root of his name can be clearly seen in the 10th century Abecedarium Nordmannicum where we read the cosmological statement, “Tiu, Birch, and Man in the middle”, while the imagery of the stanza associated with his rune in the Old English Rune Poem is glaringly celestial; conjuring the ever constant star in the night skies and reflecting the ancient Vedic perception of Dyaus as a black horse (the night sky) draped in pearls (the stars). We might further glean Tiw’s enduring association with the heavens in the name of his Eddic father, the etin Hymir, and in the symbolism of the Hymskvidha.  The name Hymir is likely related to the Old Icelandic word huma, meaning “twilight, dusk”, while his hall is said to stand at “heaven’s edge” and the greatest of his kingly herd of cattle was the ox named Heavenbellower.

The O.E.R.P. also connects Tiw with the notion of glory — having substituted his name with the Old English word tir (glory) — and this is laid bare by Snorri Sturlusson in his Prose Edda, where he states that a man of great boldness is called tyr-bold, while he who is exceedingly well-informed is called tyr-wise. We also see it reflected in Tiw’s Eddic appellation “the Leavings of the Wolf”, which is of course — understanding the pan-Indo-Germanic  symbolic value of the wolf as one of death and the grave — a glaring reference to the “name undying” or “glory”. To paraphrase the Havamal, “Cattle die, kinsmen die, and the ravenous wolf shall eat it’s fill, but I know one thing that never dies, a good name well earned”.

Of the various lines of speculation, investigation, and thought one can pursue from this point, one that immediately jumps out is Tiw’s association with the Thing (Assembly) — which is an interesting path of inquiry itself, as it is at the Thing that the “collective light” of the Tivar is assembled — and the Thing’s own association with the heavens, the celestial bodies, and the creation/maintenance of time, ie. observation of the celestial bodies (a tradition extending as far back as Tiw’s name, as seen in the Nebra Skydisc, Stonehenge, and the Goseck Circle). As we read in the Voluspa,

“The sun, the sister | of the moon, from the south
Her right hand cast | over heaven’s rim;
No knowledge she had | where her home should be,
The moon knew not | what might was his,
The stars knew not | where their stations were.

Then sought the gods | their assembly-seats,
The holy ones, | and council held;
Names then gave they | to noon and twilight,
Morning they named, | and the waning moon,
Night and evening, | the years to number.”

It is an interesting fact that the Old English word thing (meeting, assembly) springs from the same P.I.E. root as the Gothic theihs (time). This root meant “stretch, span, finite space” and is speculated to have originally referred to the set time that assemblies occurred in.

Here one’s mind is drawn to the “sub-pantheon” of the Eddas, perhaps the same as that (over?) emphasized by Caesar in the Gallic Wars when he wrote,

“They (the Germans) rank in the number of the gods those alone whom they behold, and by whose instrumentality they are obviously benefited, namely, the sun, fire, and the moon.”

Such figures a Mundilfari (the Turner, axis (of time)) and Delling (Shining One) — who begat Sun and Moon and Day, and who are otherwise associated with Night — would all seem to have had a special association with Tiw  … if indeed they are not, in the case of Mundilfari and Delling, aspects of him.

In light of all this (no pun intended), in doing a comparative analysis, we might place aside, at least for a moment, such figures as Zeus, and even Mars, and look instead toward the Greek Uranus or, more poignantly, that Titan’s own offspring, Hyperion, who is the father of Helios (Sun), Selene (Moon), and Eos (Dawn) and of whom Diodorus Siculus wrote,

“Of Hyperion we are told that he was the first to understand, by diligent attention and observation, the movement of both the sun and the moon and the other stars, and the seasons as well, in that they are caused by these bodies, and to make these facts known to others; and that for this reason he was called the father of these bodies, since he had begotten, so to speak, the speculation about them and their nature.”

2 thoughts on “Tiw : Our Father Whom Art in Heaven”