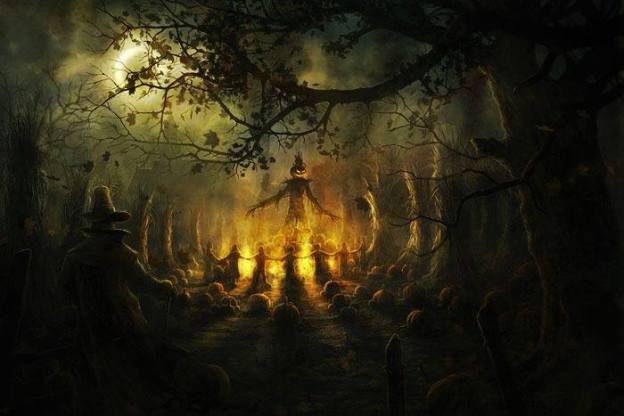 Prior to the late 4th century, Christians celebrated their dead martyrs as local traditions at a variety of different times of year. By the 5th century AD the Church was at work trying to unifying the celebration of martyrs and saints into a single holiday. The date for this celebration tended to fall in the month of May until, in the early 7th century AD, Pope Boniface the IV nailed it down and established the “dedication Sanctae Mariae ad Martyres” on May 13th.

This is the Latin origin of what is known among today’s NW Europeans as Hallowtide, and includes “All Saints Eve” (Halloween), “All Saints Day” (All Hallows), and “All Souls Day”.

How then is it possible that this Catholic “feast of Martyrs, Saints and the dead” came to be celebrated beginning on the eve of October 31st and on to November 2nd?

Is it really just a syncretism with the Celtic Samhein; the Celts themselves having been conquered and Romanized by the Roman’s in the 1st century BC and then Christianized as an act of political correctness in the 4th century?

But our first clue on how that came to pass is to be found in the language itself. Halloween is of course a word firmly rooted in Old English, which itself is firmly rooted in West Germanic, and from there Proto-Germanic.

It is neither Latin nor Celtic in origin.

Similarly we have the flow of time, in which Hallow Eve pre-cedes All Hallows Day; a peculiarity (ie. reckoning the day from sundown to sundown rather than sunrise to sunrise) which is witnessed in Germanic time reckoning from as early as Tacitus. This Germanic sense of the flow of the day is likewise the reason that Christmas Eve pre-cedes Christmas Day.

The historical time frame of the move of the Catholic feast from mid-May (7th century) to early November (8th to 9th century) is also telling, as it was precisely within this time frame that the Anglo-Saxons and their continental Germanic brethren were converted to Catholicism.

Now, in a letter dated AD 601 and addressed to Mellitus, his missionary at work among the Anglo-Saxons, Pope Gregory I mentions a custom among our ancestors in which “a large number of cattle are slaughtered”, and that this heathen rite should be made over into “a feast in honour of the saints”.

Meanwhile, according to the Anglo-Catholic historian Bede, Blotmonath or Blood month, was a time in which “the cattle which were to be slaughtered were consecrated to the gods.” The Anglo-Saxon Blotmonath more-or-less corresponds to the modern month of (the Latin-rooted) November, and the slaughter that took place in this month was substantial and represented the annual thinning of the herd; required so that resources would be sufficient to see the herd through winter.

In reflecting on the matter of what the Hallowtide meant within the native beliefs of our English ancestors, I don’t think that we should become too preoccupied with the consecration of “the cattle that were to be slaughtered”. Such things would have occurred in regards to any sacrifice/feast, save here, the number of cattle to be slaughtered was quite substantial in comparison, and probably set the stage for the sacred rites of the tide, as we see in the reference to the fall-tide disablot in Egil’s saga, “there was the best banquet and much drink within the hall”.

Basically, the over-abundance of meat, not to mention the abundance of food in general, ie. from the recent harvest, set the conditions for a particularly abundant feast.

But what was this feast devoted to? Afterall, it was not just “a feast”, but a sacral feast in which the animals were consecrated.

To the extent that the Viking Age North Germanic tradition of Snorri Sturlusson is indicative of anything pan-Germanic, the winter nights sacrifice was for good luck in the coming year. Other bits and piece from the lore — which might coincide and devolve more precisely with harvest than with the herd-thinning — include the disablot, the alfablot, Freyblot, and of course the widespread custom of the “Last Sheaf”. Each of these have their association, be it strong or weak, with the dead and/or the exceptional dead, while the Last Sheaf customs were generally associated, strongly or weakly, with Woden, particularly in his guise as the Wild Hunter.

As the Catholic associations of the tide are strongly focused on the veneration of saints and martyrs, and as the later, but inherently related (to West Germanic) North Germanic traditions are themselves strongly focused on the veneration of the dead — a general phenom. well represented in earlier law codes and similar legal treatments of “heathen practices” on the Continent — it is fair to suggest that the native Anglo-Saxon “Hallowtide” may likewise have involved veneration of the dead. And of course, that keeping up relations with the dead was of vital importance to the good fortunes of the community.

“42. In order that no new saints may be venerated or invoked, do not allow their monuments to be erected along the roads, etc.”

“1. sacrilege at the tombs of the dead… 2. sacrilegious funeral songs made to the dead… 9. sacrifices made to some saint… 25. Those who carve images for dead persons whom they say are saints.”

Reflecting on the raw nature of the tide itself, we see a gradual retreat of of the spirit of life from nature. The fields lay bare, the trees have begun to lose their leaves, and nature itself has begun to cool and discolour. To top it all off, the blood of life, quite literally, flows freely and saturates to land.

The spirit of death has come into power; itself betokening a “thinning of the veil” between the world of man and those less seen “otherworlds” that “surround” it.

This “thinning of the veil” allows the spirits that occupy those “otherworlds” to wander into our own; attracted to the substance of life, the blood, that has come to saturate the earth. And while some of these spirits might not represent anything more mysterious or malevolent than “late grandfather Harold”, many are the otherworlds and varied are their denizens. Others would be the starving souls of the evil or otherwise neglected dead, or things more primal that had never existed in association with man, eg. thursar, all particularly attracted, like hungry predators, to the life-force inherent in the blood of the slaughter.

Such beliefs would thus have made the fall slaughter something of a dangerous thing, from whence, we might speculate, the season took on it’s more “horrific” associations, ie. above and beyond the Christian association of anything non-Christian or heretical with “horror”.

This horror element would subside and morph with the first snowfall, ie. the washing away of the blood of the slaughter, and the promise of the Yuletide.