The “Lex Salica” or “Salic Law” represents one of the earliest recorded collections of Germanic customary law. In this case the Law Code reflected the laws of the Salian Franks and their Merovingian aethelings on the eve of Clovis’ conversion to Catholicism and some 50 years after their settlement in the northern region (Neustria) of the former Roman province of Gaul.

Among its various offences we find those dealing with the practice of magic and harm done by magic, such as,

“If any one have given herbs to another so that he die, he shall be sentenced to 200 shillings (or shall surely be given over to fire).”

“If any person have bewitched another, and he who was thus treated shall escape, the author of the crime, who is proved to have committed it, shall be sentenced to 2500 denars, which make 63 shillings.”

“If somebody accuses another of witchcraft, and he brings to the thing the cauldron in which the accused is said to make brews, then let the accused be fined 2500 dinars which makes 63 shillings.”

“If somebody causes another person to waste away by means of witchcraft, and he is able to prove it at the thing, then let the accused be fined 1008 dinars which makes 200 shillings”

Some observations on the above…

To start, these are not my translations and the term “witchcraft” does not reflect the original language of the laws and/or that of the document they were record in. The specific term or terms that were used were certainly not witchcraft, which is fairly English specific in the Germanic world, and, for better and for worse, simply the term deemed equivalent in these modern translations.

The technical terminology really does matter, more-and-more, as one gets increasingly intimate with the subtleties and nuances of the subject, ie. not everything called “witchcraft” or “seidhR” (etc.) actually reflect the practices of witchcraft or seidhR (etc.).

Anyway, most of the Salic laws deal with harm caused by magic; lending a general no harm, no foul sense to the spirit of the laws. There is however the one exception where presenting evidence of the mere practice of “witchcraft”, ie. the cauldron, invited a legal penalty.

While this suggests a fundamental, and very understandable mistrust of “magic”, dealing as magic does in the hidden, the unseen, and indeed the anti-social, one will note that in each of the above citations, proof is explicitly demanded by the Salic law; even if the laws only outline the details of what constitutes proof in one instance and no doubt simply assumes what for them and theirs was culturally obvious. This suggests an equally fundamental mistrust of the very accusation of witchcraft, which again is very understandable given its “hidden” nature.

Finally, except for the one vague reference to being “given over to the fire”, ie. burned, the Salica Law prescribes “common penalties” (ie. fines) to these acts. Both of the acts that indicate the practice of harmful magic, but result in no harm, are otherwise prescribed at 63 shillings. This is an amount equal to those fines associated with the theft of an entire flock of 25 sheep, the rape of a freeborn woman, the assault and plundering of a freeman, and attempted killing of a freeman. All of which were serious offenses.

Curiously, the two instances where magic resulted in death, result in a fine of 200 shillings, which, while clearly marking it as a far more serious offence than those just mentioned, falls on the low-end of the wergild (life-price) system within the context of the Salic Law. A 200 shilling fine was equal to the fine for having been found guilty of grave-robbing, or for killing either a woman beyond her child baring years or your average freeman. By way of comparison, to have killed a freeman and then attempted to hide it (ie. murder as opposed to man-killing) carried a fine of 600 shillings.

One will also note the relative lack of reference to women in the Salic Laws as they pertain to the practice of “magic”. And that even where women are explicitly referenced in relation to witchcraft, they must also be viewed within the context of the greater body of Salic law and it’s valuation of women; which, as just referenced, reckoned the life-price of a vibrant and virile young freeman as equal to a woman beyond her child-baring years, and at THREE TIMES LESS than a freeborn woman in her child-baring years! 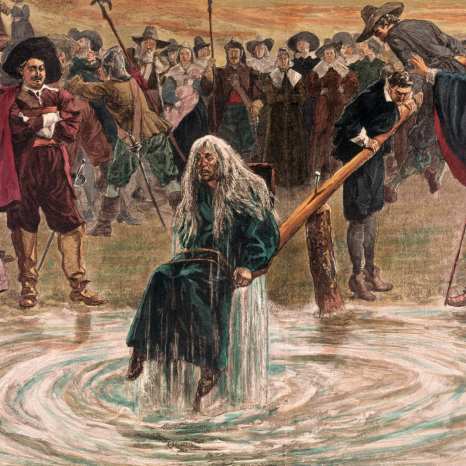 The AD 6th century Gallo-Roman Catholic, Gregory of Tours writes casually of those with prophetic powers (spa) within the context of royal Merovingian interactions. (eg. Guntram and the seeress).

The Merovingians were of course the same people who, some 35 years prior to the birth of Gregory, gave us the Salic Law with its laws involving “magic” and “magical harm”.

Gregory also related a story in which a Merovingian queen, one of the wives of Chilperic, Fredegund I’d presume — who lived at the time of Gregory, and appears to have been loathed by him — ordered the torture of “a number of Parisian women” (and a man named Mumulus), believed to have killed her young son, Theodoric, via the use of herb potions and magic.

As Gregory wrote, “They admitted to the practice of witchcraft and the perpetration of many deaths… The queen afflicted them with even more horrendous forms of torture. Some she beheaded, others she cosigned to the flames, and still others were killed on the wheel with their bones broken.”

The Edictum Rothari (c.643 AD) is to Lombardic law what the Salic law is to Salian-Franks; a compilation and writing down of the formerly oral legal traditions of the Lombards. On “witchcraft” it states,

“If a man accuses a girl or free woman who is under the guardianship of another, of practicing witchcraft or prostitution,… if he shall persevere in his accusation and insist that he can prove it, then let the case be decided by a judical duel or “camfio” so that the matter may be left to the judgement of God”.

“Let no man presume to kill another’s female servant for being a witch (striga or mascam) for such things are not credible to the Christian mind and it is not possible to eat a living man from the inside out.”

Here we get some insight into the seeming impatience behind the relation of the duel to the charges of witchcraft, and the notion that it represented little more than a vile slur against someone’s honour than anything more substantial.

This very Christian, very unheathen view of “harmful magic” would find further expression, as we read in Charlemagne’s Capitulary on Saxony (AD 782),

“If any one deceived by the devil shall have believed, after the manner of the pagans, that any man or woman is a witch and eats men, and on this account shall have burned the person, or shall have given the person’s flesh to others to eat, or shall have eaten it himself, let him be punished by a capital sentence.”

This trivialization of witchcraft, the refusal to acknowledge it’s power, and ultimately the impatient will to punish the accuser, was the initial Christian reaction to Germanic “witchcraft”. And it stood in direct opposition to indigenous Germanic belief and general mistrust in magic along with accusations dealing in the unseen.

The earliest Anglo-Saxon Law Codes make no reference to the practice of witchcraft. Of course, it took Kent almost 100 years to draft laws against “devil worship”, so that is perhaps not at all surprising.

Nevertheless, the fundamental mistrust, indeed hostility, of at least the Anglii toward “harmful magic” is very apparent in a story Bede related regarding King Aethelfrith of Northumbria (late 6th to early 7th century AD) and a band of monks he encountered who were praying “against the swords of the barbarians” (ie. against Aethelfrith). Bede further writes,

“King Ethelfrid being informed of the occasion of their coming, said, “If then they cry to their God against us, in truth, though they do not bear arms, yet they fight against us, because they oppose us by their prayers.” He, therefore, commanded them to be attacked first, and then destroyed the rest”.

It is not until the Laws of Alfred that we begin see witchcraft enter the laws as a punishable offence; though we should remember that the orthodox Christian stance of the matter of witchcraft among the Germanic peoples was, up til now, that witchcraft was just so much superstitious hogwash. With Alfred’s Laws however we not only see witchcraft introduced as a punishable crime, but we see it introduced firmly within the context of the Old Testament,

“the women who are in the habit of receiving wizards and sorcerers and magicians, thou shalt not suffer to live“.

By the time of Cnut’s Laws we see the beginning of the conflation of witchcraft, not only with “harmful magic” and its own more traditional associations with secret killing, perjury, adultery, and incest, but also with such religious practices as the “worship of heathen gods and the sun and the moon, fire or flood, wells or stones or any kind of forest tree”.

Conflation of various distinct disciplines, such as that of the spakona and seidhkona, are themselves clear in the North Germanic lore, and likely went the way of England in growing to include all sorts of heathen observances.

By the time of the witch hunts of the 15th and 16th centuries, it had expanded to include non-orthodox Christian belief; where heathen, heretic, and witch could be used more-or-less interchangeably. We see a similar evolution to the word racist in modern timers. And it is here that we modern folk first picked up the now muddled mess that the old magical and religious lore of our ancestors had become.

As a result, such things beg to be questioned. What is worship as opposed to the practice of magic? What is good magic and what is bad magic? And to what degree should those who dabble in such anti-social pursuits as influencing society via hidden (and often solitary) means be tolerated in our midst? And to what degree should accusations regarding “things unseen” themselves be tolerated?